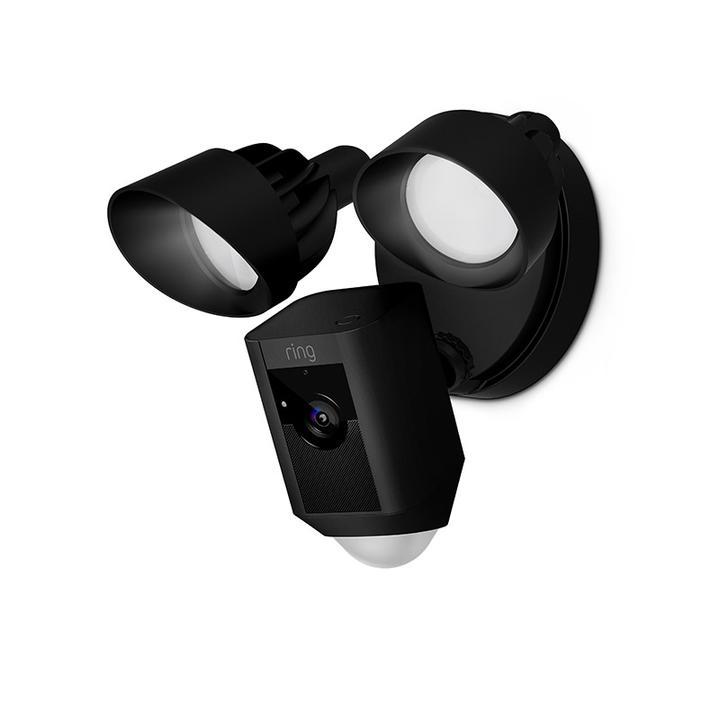 As a homeowner, nothing is more important than making sure that your home is as secure as possible.

The Ring Floodlight Camera is a popular option here, but is it an effective one? It comes with a wide variety of features, each of which has its own pros and cons, but are they worth your time and money?

Let’s take a closer look at the Ring Flood Camera and see what this eye in the sky can see for you.

What to Look for in a Floodlight camera?

At first glance, the basic requirement for a security camera would seem easy: provide a means of checking what’s going on outside.

But what does that mean in 21st-century surveillance? We’ve come a long way since the days when a camera mounted outside your home was novel, and that alone simply won’t do anymore.

Instead, we need to look for cameras that have features that allow them to see further, better, and in more difficult conditions.

Among the most important features to look for in security cameras include:

Danger never sleeps, and neither should your camera, which is why you’ll want to make sure that you find a model that sees well in the dark.

In addition to traditional night vision, you’ll also want to look for other alternatives, such as floodlights, to make sure that your camera can pick up the clearest picture possible at night.

This can also be helpful if you live in a rural area and are planning on installing cameras to keep an eye on your animals night and day.

Just how much can a given camera see? At a minimum, your camera should be able to see 90 degrees, with 140 degrees marking a top-flight camera.

Everything is high res nowadays, and your camera should be no different. Security cameras typically range from 480p to 1080p.

Your eyes can naturally detect motion, which helped inform our ancestors where danger might be.

The same principle holds for security cameras. You want to make sure that your security camera has sensors that will be activated by motion, and the more sensitive, the better.

Motion detection sensors range from 90 to 270 degrees, with more obviously being better.

You’ll also want to check how far out its radius of detection extends, with some being able to reach up to 100 feet.

Will your camera be running on a battery or be wired into an electrical system?

If the former, you’ll need to make sure that you keep the battery charged, which means that these types of security cameras will typically require more attention than wired ones.

On the other hand, wired camera systems are typically a lot more labor-intensive to install.

A few cameras are able to record audio as well as video.

Even fewer cameras allow you to talk to the people being observed by the camera via an intercom system.

How big is the camera, and how much does it stick out?

It’s an app-app-app-app world, and we’re all just living in it.

The most modern security cameras come with apps that can connect to your phone, allowing you to control your cameras and check on your home security situation wherever you go.

Thankfully, the Ring Flood Camera ticks just about all of those boxes, offering a comprehensive security camera experience.

Among the features offered by the Ring Flood Camera are:

1. Lighting up the Area

It isn’t called a “flood camera” for nothing — this unit is defined in large part by the performance of its bright mounted floodlight.

It comes with other camera-light combos that you can use instead, but the floodlight offers far and away from the brightest and typically best results.

The floodlight itself features two LED lights mounted on opposite sides of the camera, flooding the area in front of them with light to the tune of 3000 lumens.

For context, that’s enough lumens to illuminate a 100-foot table via dozens of candles.

Needless to say, that’s both enough brightness and range to illuminate and track activity in front of your camera.

That being said, that’s also potentially enough lumens to annoy neighbors if you live in a tightly packed area.

Still, the motion sensors and other settings on the app can help you control when these lights come on and how bright they are.

Speaking of which, the motion sensors on the Ring Flood Camera, as with any modern security camera, are an essential part of its functionality, which is why it’s good that they’re another positive.

It makes use of smart technology to alert you when it detects something (though you can set the “somethings” for which you receive notifications so it doesn’t bother you about every cat, dog, or a bit of debris.)

You can also change the motion-sensing field to determine how far of a range you want it to employ.

The motion sensors can track activity 270 degrees around, which, as mentioned above, is the high point for industry standards.

What really sets the Ring Flood Camera’s sensors apart is that they’re tied to a local network.

Remember what we said above about motion range mattering? Yeah — try a range of the entire surrounding neighborhood.

This thing is loud at 110 decibels. For comparison’s sake, that’s as loud as a riveting machine or live rock concert — not quite as catchy as “We Will Rock You,” but more than enough to put would-be burglars “Under Pressure.”

As mentioned above, this is a rare feature, so if you’re looking for a security camera with two-way audio, rejoice; the Ring Flood Camera has you covered.

You can use that camera to speak to guests as they come to your home or to try to warn off burglars if for whatever reason that 110-decibel siren didn’t do the trick.

Obviously all those bells and whistles won’t matter much if you get 240p video for your trouble.

The camera can zoom in on objects close or far away without any major distortion to the image.

This is a battery-powered unit, which means that you’ll have to charge it. Thankfully, you shouldn’t have to do so too often, as the average battery life is about one year.

This camera is also on the larger side, as is often the case with battery-powered units.

In terms of the size of this unit’s storage space, it has 16 gigabytes of memory, which it stores on a microSD memory card.

The only way to upload things to a cloud is to link your app to a Dropbox account.

As mentioned, you can use the app included with this security camera on your phone, tablet, or other device.

You can schedule certain settings to activate, can integrate it with Alexa, and can even have Alexa project a live feed of what the camera’s seeing onto your TV.

Finally, the app is totally wireless with a strong Wi-Fi signal of 2.4hz.

The two biggest points of contention with this model are the subscriptions.

To get the most out of your Ring Flood Camera, you’ll need to pick up a subscription.

The good news is that a basic plan is only $30 per year, but to take advantage of all of the features offered by this model, you’ll need to subscribe to the Protect Plus plan, which is $100.

Technically you don’t have to pay anything and can use the camera as is, but you won’t be able to take advantage of features such as cloud storage or certain video review features.

Still, in fairness, subscriptions are becoming increasingly common among security cameras, so this is hardly something that is particular to the Ring Flood Camera.

The other big issue with the Ring Flood camera is installation time.

While the company claims installation should take five to ten minutes, indications are that it can take longer than that, especially if you don’t have prior experience installing security cameras or don’t have a power source for this unit.

There is a lot to like about the Ring Flood Camera.

Its lights are extremely bright, its camera is of high quality, it offers two-way audio, and its motion sensors and smart features offer a ton of protection.

In short, if you’re looking to secure your home, you’d do well to Put a Ring on it!