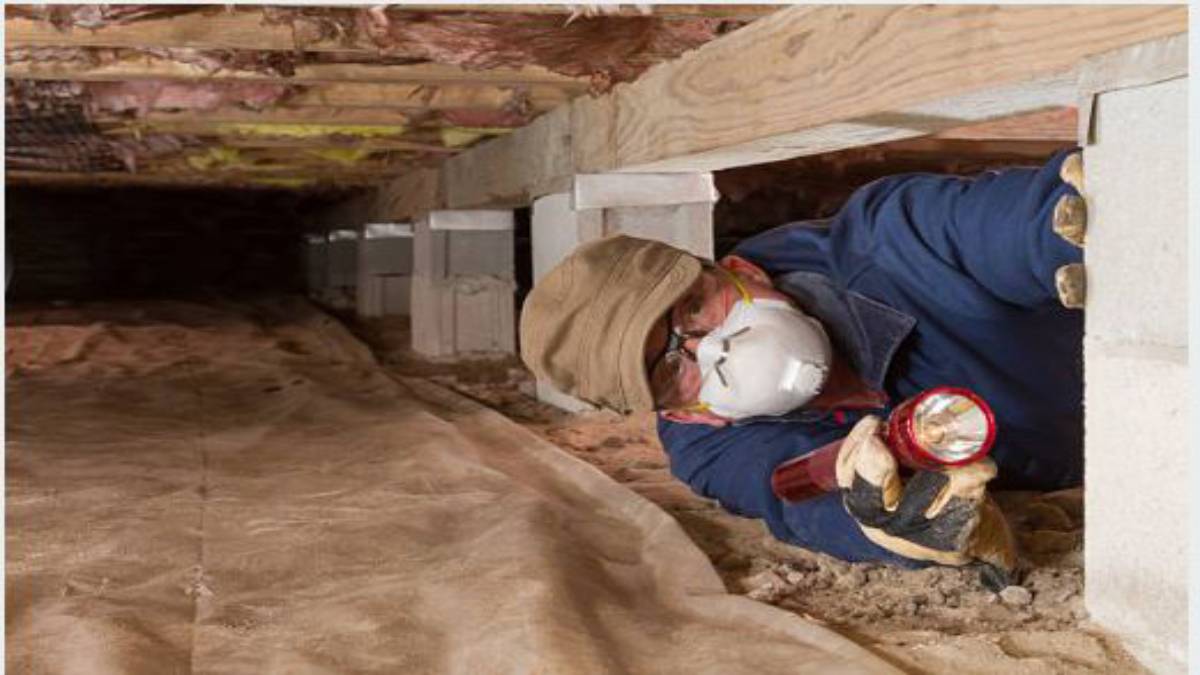 Can you say, whether it is a basement or a crawl space? I was also into the same confusion and therefore, I did some research and found out the difference between these two. Here, you would find what I have got.

Is crawl space a basement? Crawl space is only for a light store of things, however, the basement can be used as a living area. Therefore, crawl spaces are not taken as basements.

Basements have enough room and also increases the value of a house. However, crawl spaces don’t have that much room and as the name suggests you would have to literally crawl to reach for your things.

Crawl space, therefore, can be useful only in those places where you don’t have the option to build a basement.

Choosing your perfect house architecture starts by determining the right foundation to go with. There are many factors that will determine the type of foundation to construct, but mostly they include the size of the house you are building, the climate of the area you live in, and your budget. For many people, the decision narrows down to either building a basement or a crawl space.

Trying to understand the difference between a basement and a crawl space can be, at times, confusing. Luckily, by the end of this article, you will understand the dynamics used by the two, plus their pros and cons, to help you make more informed choices.

Choosing Between Basements and Crawl Spaces

There are areas where having a basement is not an option due to climatic complications. Factors like how sloppy the area you desire to build your house on, how close are the water tables, and water drainage concerns might limit your choices.

In such areas, having crawl spaces may be the right decision.

However, if you live in areas such as the Midwestern America region, you might have the option of either doing a basement, crawl space, or a semi-basement for your foundation.

Another primary concern in choosing between a basement and a crawls space is if you have to dig to get the foundation you want. For regions where you are likely to experience soil freezing, digging is a way of solving the soil heaving problem. Soil heaving is when the soil freezes due to climatic conditions and expands. This leads to the ground pushing up your foundation, which may lead to damages and consequently risking the lives of the inhabitants of the house.

When the soil is dug below the frost line, the soil around the foundation will remain warm enough to prevent heaving from happening. The only question is how deep you should go to find the frost line, which might be determined by the building code as well.

A basement is deeper than a crawl space. To some people, a cellar is a deeper crawl space. Basements can be used as living spaces because of their sizes and structural security. On the other hand, crawl spaces are used primarily as storage spaces since they are much smaller and may not be as structured as basements. Crawl spaces elevate the foot of the house by a few feet from the slab foundation. They can be as small as three feet or less and might not have to have a concrete floor.

Basements and Its Pros and Cons

Basements have the ability to play several roles, depending on how big they are. However, they, too, have their disadvantages. Still, their advantages are quite significant and might outweigh their problems, depending on the area where you build your house.

One of the most significant advantages of having a basement is the security from chaotic mother nature reactions. Cellars offer safe areas to stay when an earthquake or a tornado hits a city.

Thanks to the concrete and solid foundation walls build around them, and they can sustain the pressure exerted on the house during heavy winds or an earthquake. They will cover you from the dangers of a collapsing building while still making sure that your home is well-anchored.

Secondly, basements are cheaper to construct than other rooms of a house. You get an additional square-footage, which usually costs a bit less expensive per square foot compared to building the same space for a place in the main house.

Have you ever watched a technician trying to repair something from the foundation of your house and does not seem to get the right angle to do his job?

Such cases might be avoided or made more comfortable if the house had a basement instead of a crawl space or a plain slab. It might even be cheaper as some technicians charge their services based on the difficulty of a task, among other complications.

Basements can also act as seasonal living spaces. Every season has its unique requirements. During the summer, it might be too hot while the winters come with freezing temperatures. Basements can act as the escaping room for some of these seasons. Alternatively, if you have a space issue when visitors stop by for a sleepover, it is easy to turn your basement into one of the sleeping rooms.

Installing HVAC equipment is quite easy when you have a basement. The spacing also is adequate for the working of the same pieces of equipment. Basements also help preserve the integrity of a house’s foundation in the long run.

In as much as basements come with extra space, maintaining them means more work than maintaining a crawl space. This will mean that you always schedule days to clean your basement just like any other room of the house if you want to keep it in a livable condition.

Secondly, constructing a basement will take more time, more workers, and a higher budget compared to building crawl spaces. For this reason, it is the most expensive type of foundation among the three popular models.

Basements are at more risk of getting flooded than crawl spaces, primarily when constructed in areas where the water table is a bit high. This, in the long run, will lead other foundational permanent damages that may subject the house dwellers to high risks.

Another primary concern with basements is access to natural light. They may be a way of adding rooms to your house, but you will also have to be more creative about how to light the place up, especially during the day. This might mean additional costs either in the construction part or when paying electricity bills after you have moved in.

Crawl Spaces and Its Pros and Cons

If a basement is too expensive for you, you could consider building crawl spaces instead.

Crawl spaces are quite easy to construct compared to basements. Although they require more work than just having a slab foundation, having crawl spaces appear like having a small price to pay for the extra storage.

You will also not need to dig as deep as when constructing a basement, and the amount of concrete to be used is also relatively small. The labor will be significantly less than that used for basements, and the time spent in construction is also not as much as its counterpart.

Most crawl spaces are constructed for quicker access to home utilities such as electricity and water. These pipes are passed through a crawl space and then networked to serve other rooms in the main house. Your ductwork can comfortably be done here as well, and repairs are not that stressful.

Crawl spaces have a way of making your floor feel warm. With the house being elevated from the floor, there is room for air circulation and warmth to build up, which consequently increases the warmth of your house’s floor. Although your floor may be made of concrete, likely, you will not feel as so if you have a crawl space underneath.

Crawl spaces are low maintenance rooms. Most people do not think about having to clean them out for a while unless you use yours for regular storage. In some areas, they are more recommended compared to basements as it is easier to have drainage pipes built in to prevent them from flooding.

Given that many people neglect regular maintenance for crawl spaces, it is easy for unwanted pests and rodents to build a home under your house without you finding out for a long time. This may lead to you and your family being subjected to an unhealthy environment in the long run. Bacteria and molds can quickly multiply as well as dust that might lead to unforeseen coughs and cases of flu.

Unlike basements, crawl spaces are not strong enough for protection during a tornado, earthquake, or a storm. If your foundation was not well built, the house could collapse inwards. You will need a plan B to deal with severe mother nature conditions if you leave within an area where such adverse weather problems are regular.

If you are not careful enough to build a proper drainage system, your crawl space will flood during heavy rains. Draining underground accumulated water will be hectic, plus you might be subjected to waterborne diseases if the situation is not handled as soon as possible. You will also need to insulate the outer walls of your crawl space to make sure that the temperature conditions are well regulated.

However, if you are tight on your budget, you can go for crawl spaces.

Alternatively, you could generally build a basement and finish its interior later when you have saved enough. Make sure you have consulted building experts before you decide on which type of foundation to go with.

Also, do not start the foundation if the building authority body has not approved your architectural work in your region.

What is a slab foundation? Slab foundation, the name itself says about it. This is built on a concrete slab. This is the quickest and easiest way to build the foundation but at the same time it is not so secure and it would be very difficult to get a broken slab repaired.

Max Carrigan has been an enthusiastic DIYer for quite a long time. As of late, he's truly taken to home security, however, he has a ton of involvement with a wide range of undertakings from Home decor to Home security

Chamberlain MyQ is the best garage door opener that I have come through so far. In the last post, we discussed how chamberlain work with Alexa, but if you already have a Google Home, then what you...

Continue Reading
link to Does ring work without a subscription?

Almost all smart devices come with a subscription plan and adding one more to it is not easy unless you have surplus amount to spend. I researcheed a lot and then thought of buying a Ring doorbell...

Hi! I'm Jason. This is the site where I share all of the projects I've done and things I'm learning. I have been an avid DIYer for years. Recently I have really taken to home security, but I have a lot of experience with all sorts of projects from installing Smart Home Security Systems to Plumbing, Electrical, Framing and Tiling.

Posts Handpicked For You