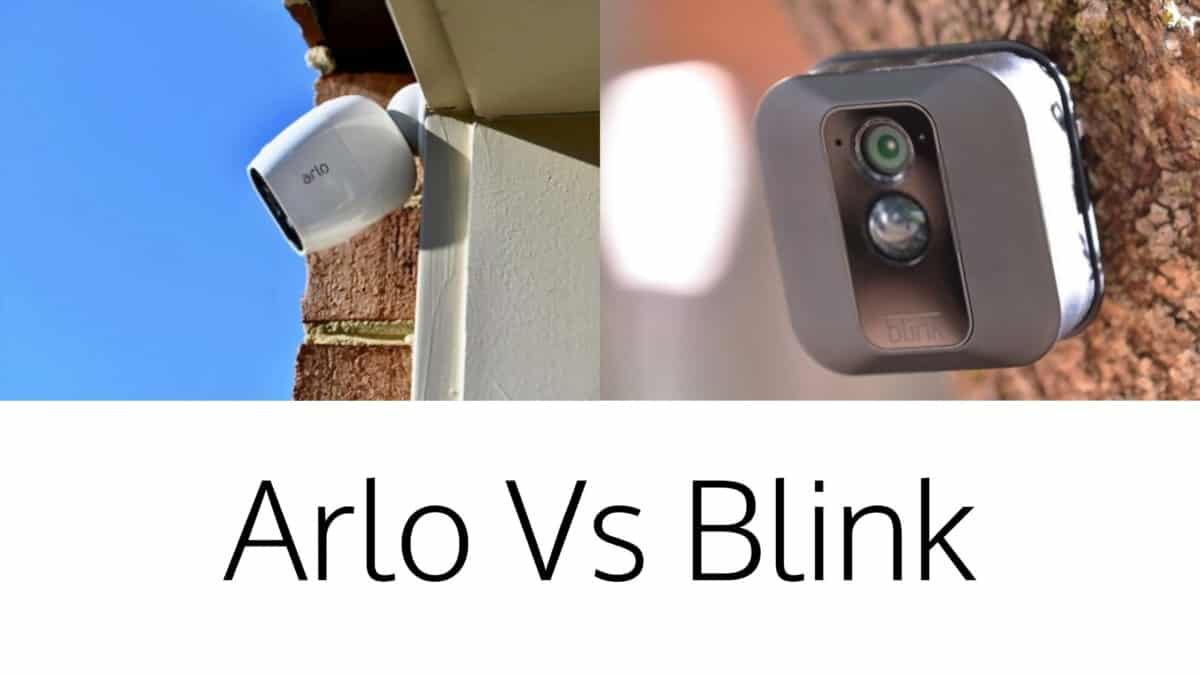 There are quite a few companies vying for market share in the home security and camera space. The home security has now ballooned considerably and is rapidly becoming an attractive investment option for larger companies. It is expected that the global home security camera market is about to reach upwards of $1,306 million by the end of 2023.

The major drivers of growth are the fact that home security cameras are now becoming easy to install (you don’t even need to call an expert anymore to fix the camera) and the fact that more and more people are becoming conscious about their security needs. On top of that, the fact that companies are now integrating additional features, such as motion detection, have made them a very popular choice.

Two of the biggest names in the industry are Arlo and Blink. Arlo Technologies describes itself as a home automation company that manufactures home security cameras. The company was originally owned by Netgear. The company was launched in 2014 as a division of Netgear.

In 2018, the board of directors at Netgear unanimously voted to separate the company and set it up as a separate entity. It was also listed on the New York Stock Exchange, after issuing just under 20% of its common stock during the IPO. This ensured that Netgear still maintained majority oversight and control over the company.

On the other hand, Blink is also a home automation company that manufactures battery powered home security cameras. The company was created by Peter Besen, Stephen Gordon, and Don Shulsinger back in 2009. It was originally launched as Immedia Semiconductor Inc., but it soon turned into a consumer electronics company.

Amazon, which had been taking a keen interest in home automation and security systems, ended up buying the company in December 2017. A year later, they would go on to buy Ring, which is the market leader in the home automation industry. Immedia Semiconductor LLC is still an independent subsidiary. Many expect that the company is going to use the technology in its Amazon Key service.

Now, if you are interested in a decent home automation system, both Arlo and Blink are decent options that you can consider. However, you need to first put the two together and find the best one based on your needs. If you do a comparison of Arlo vs Blink, you might realize that the two are quite similar.

Blink vs Arlo is a pretty common debate among home security professionals, mainly because both of the companies manufacture similar products.

Arlo is headquartered in San Jose, California, and has managed to establish itself as a major competitor to Blink.

If you are in the market for outdoor or indoor cameras, you will realize that both Arlo and Blink offer pretty attractive options.

For instance, the Arlo Pro vs Blink XT is one of the most common comparisons that people usually make.

In the following review, we will talk about what sets the two companies apart and what they have in common, and carry out a comparison of some of their most popular products.

What Do the Two Have in Common with Each Other?

First, let’s talk about their similarities. Since they are both manufacturers of home security cameras, both of these companies share quite a few commonalities.

For starters, the products offered by both Arlo and Blink are incredibly easy to install. You can get them up and running within a half hour or less. None of these companies offer a professional installation service, and many customers are quick to state that they don’t actually need any assistance whatsoever when it comes to installing their devices.

One of the most important things that many people want to know when buying a home security camera is the quality of video. Thankfully, both Arlo and Blink offer fantastic video quality. The Blink video doorbell offers sharp video. Both of them have cameras with full HD video recording, and their night vision streaming is also fantastic.

Then, you have affordability. Arlo, as you might know, is slightly on the higher end. So, while both can be considered to be relatively affordable, it’s easy to say that Blink has a lower-priced product offering. When you purchase several cameras at once, you will be able to get a discount.

Finally, you don’t even need to worry about signing a contract when you buy Arlo or Blink’s products. You just pay for the cameras on your own and install them on your device. The only additional expense that you have to worry about is the upgraded storage plan (if you decide to go for it).

What Sets Them Apart?

Most of the cameras produced by Blink are able to record video up to 7,200 seconds (a couple of hours) without any charge. More importantly, you can’t buy any additional video storage for your cameras.

The only paid plans that you can choose from are provided for the Blink Mini camera. The camera requires you to buy a plan to store any video.

When you purchase the Blink Mini camera, you will get a plan that is going to run down until December 31, 2020. After that, the basic plan, which gives you 60 days of rolling storage and provides coverage for a single camera, will cost $3 per month.

The company does offer a discount, allowing you to get coverage for $30 per year if you pay in advance.

Their Plus plan is also an option, though it costs $10 per month. For yearly coverage, you will have to pay $100, which is a savings of $20. This also covers virtually all of the cameras that you own.

On the other hand, Arlo has a range of plans that start from $2.99 per month, allowing you to choose one that best fits your needs. You can also opt for a plan that gives you more cloud storage, and some of the programs also give you emergency calling options. As soon as you send the alert, the company will contact emergency dispatch at 911, or you can call 911 directly from your device.

Device variety is also pretty fair for both of them. Blink offers a pretty low collection of just three cameras. It’s not great, but isn’t bad either.

If you are looking for a variety of different camera options that are available at several price ranges and offer flexibility in video quality, you should definitely go with Arlo.

Arlo has an extensive range of both indoor and outdoor security camera options, and they even have wireless models that you can simply plug into an electrical outlet.

The cameras offered by Blink are an affordable choice for people who want to install and monitor the cameras on their own. There are a few pros and cons that you should know about selecting the cameras that Blink has to offer.

First of all, you should know that the cameras offered by Blink are quite affordable. The new Blink Mini costs a mere $34.99, which makes it one of the most affordable choices for people who want to install a home security camera at their place. When you combine the fact that you also get free video recording until December 31, 2020, it’s an excellent choice.

When you talk about image quality on a Blink camera, you will realize that it’s quite steady. There are hardly any negative reviews that you will find about Blink, and they offer excellent HD quality footage, both during the day and at night.

Finally, you should know that all Blink cameras with a rechargeable battery are designed to last upwards of two years. The company uses proprietary technology in its batteries to ensure that they last longer.

However, there are a few downsides, as described below:

First of all, you should know that storage options on Blink are quite limited. The two main cameras that the company offers are the Blink XT2 and the Blink indoor camera, which do not provide any space for additional storage. The Blink activity zones are also limited. You can only record video for the first two hours.

Both of these plans provide 60 days of rolling video storage, which should be more than enough for an average home. More importantly, you should know that the Basic plan only supports one Blink camera, whereas the Plus plan supports an unlimited number of these. Secondly, it is expected that the company will announce local storage for its Blink Mini cameras.

There’s no option of professional monitoring, however, and equipment choices are fairly limited as well.

If you are skeptical about the performance of Blink camera in extreme weather conditions, check our post “Can Blink Outdoor Cameras Get Wet?”

Arlo also provides relatively affordable choices for people who are looking to beef up home security. The cameras are easy to install as well, and there’s a variety of different models to choose from. Let’s check their pros and cons.

Both the Arlo Pro and the Arlo Ultra offer full HD video and also provide night vision, so you will have a full view of whatever’s going on around you. There’s also the 911 emergency feature, so you can immediately get in touch with 911 if you see anything suspicious around you.

There are quite a few storage choices available to you. You get to store seven days of footage for free, but if you want, you can always put them in the cloud. There’s the Premier plan and the Elite plan, offering up to 30 days of storage. They also provide motion detection in selected zones.

One of the biggest advantages of going for Arlo is that it offers you a wide variety of options to choose from, including baby monitors, indoor and outdoor cams, security lights, and doorbells too.

Secondly, battery life on Arlo cameras is generally mediocre. Compared to Blink cameras, you will find yourself replacing the batteries quite frequently on Arlo cameras. As a result of that, many people opt for expensive lithium ion rechargeable batteries that can last a while.

Reliability is obviously a big concern due to the poor battery life. It’s definitely not something that you would want. However, all cameras usually notify you when the battery is running low. Despite its shortfalls, Arlo definitely wins owing to its greater variety of offerings and the fact that the company has managed to capture a larger share of the market.