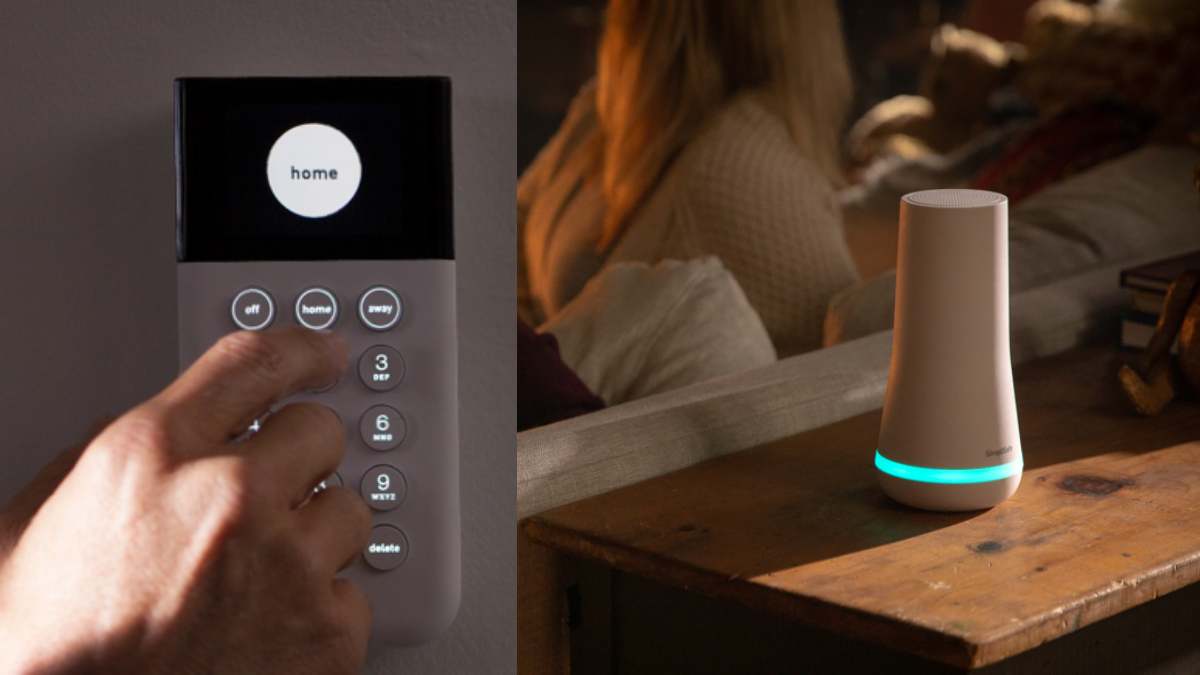 If you have an excellent taste for home security systems, the high chances are that you have come across SimpliSafe. SimpliSafe is an advanced alarm system that you can install in your home.

This system provides a pocket-friendly monitoring scheme; thus, an expert is always keeping an eye on your home security system. One of the best facts about the security plan is that you can customize it to perform several tasks.

So, Does SimpliSafe come with a siren? How loud is it? Yes, SimpliSafe comes with a powerful siren. Typically, it is a 105db or 95db siren and you can place it inside or outside your home. The siren is weatherproof but it is not waterproof and therefore, you need to place it under eve or awning.

Apart from alerting you of attempted break-ins, SimpliSafe can detect other menaces such as floods in your home, electrical related dangers, and pipe leakages, among others. Your customization plan depends on your best interests.

In short, the system offers you a broad range of operating options, depending on what you can afford! You can even connect simplisafe with alexa and voice control your security system.

As mentioned earlier, SimpliSafe operated through a security professional monitoring your system 24/7. This means your home is always safe even when you are unable to continually keep an eye on what is happening around your home?

Typically, the security personnel watching over your system work in shifts. The team is known as C.O.P.S operators.

Keep in mind that this does not interfere with the privacy of your property. SimpliSafe operates in four different ways in case of an emergency.

First, the motion sensors detect the unusual activity in your home, which leads to the sounding of the alarm.

Apart from that, the system encompasses glass break detectors, which can sense that an intruder is trying to smash your windows or glass doors.

It is not a secret that some intruders quickly break door or window glasses to rush and disarm the alarm.

With SimpliSafe, this is impossible because the alarm will sound as soon as one tries to break the glass and alert the C.O.P.S operators in a second.

The cameras give you a clear view of the ongoing situation, while the SimpliSafe mobile App allow you to control your alarm system remotely.

The various types of sensors include the entry, water motion, glass break and freeze sensors. The freeze sensors initiate the sounding of the alarm when the temperature fall below 41 degrees Celsius.

In conjunction with that, you can purchase sensors that are most preferable for your home. The price of sensors ranges from a few bucks to more than $700. The best idea is to check on quality before purchasing.

SimpliSafe does not include the popular fancy touchscreens or sensor, but it covers the basics remarkably.

SimpliSafe comes with a powerful siren. Typically, it is a 105db or 95db siren and you can place it inside or outside your home.

An advantage of the 105db siren is that it is compatible with the majority of the home security systems. The Axillary siren alerts a burglar when the police are on the way, so any intruder thinking of going on with malicious plans will face the law.

In short, it is always a win-win situation for you. The siren also comes pre-installed with batteries, which is convenient as you do not have to struggle to incorporate your batteries during your first installation.

There are two screws and mounting plates, which are optional installation tools.

The simplisafe siren is not waterproof but it is weatherproof.

According to the company, you must install it under an eve or awning. This can protect your simplisafe siren from direct rain and sun.

The SimpliSafe siren is so loud that the neighborhood can stay alert when you are in trouble.

The base station consists of a 95db siren. However, SimpliSafe offers an extra siren pack of 105db at an affordable price.

The 105db siren is better as it scares off burglars. The sound is so loud that it would irritate your ears if it goes off accidently.

Why is my SimpliSafe siren beeping?

The most probable reason your siren may be beeping is due to change in environmental conditions or low battery. For instance, when temperature fall below 41 degrees Celsius, your siren will beep but not for long. When the temperature comes back to normal, the beeping will stop. Low pitched beeping means that you may have to power-up your batteries.

Keep in mind that temperature extremes can lead to quick battery drains. However, this is not a big deal, you can change some settings to stop the beeping.

What to fix SimpliSafe siren beeping?

First, change the arm and disarm delay setting. When you arm the alarm system, there is a one-minute delay before it locks in, which gives you ample time to get out and lock the door. This also happens when the sensor trips before the sounding of the alarm.

Therefore, press the “Menu” button and select System settings, scroll down and press “Exit Delay”. This is where you have to put the amount of time that you need to exit your home before the system arms.

After this, add WIFI as the backup connection in case your SimpliSafe loses the cellular signal. Next, adjust the chime and alarm volume because there is always a chime noise whenever the system is armed.

Finally, change the siren duration. The shortest period you can apply is 30 seconds while the longest is 8 minutes.

SimpliSafe installation is an easy task. Before you begin, check the video of a ten-year-old handling the set-up on the official website. The video provides a clear elaboration of step by step installation.

Apart from that, there are written guidelines backed up by diagram regarding proper installation.

After reviewing the installation guide, you should follow the steps below.

Set Up the Base Station

Set up the Keypad

For starters, unpack the keypad box and ensure you have all that is required. Get the battery Tab to power on the keypad. Once the keypad power is ON; it automatically starts searching for the base station for pairing.

After the keypad detects the base station, you have to set up a master PIN. The Master PIN arms and disarms your alarm. It is also the critical PIN that controls other factors of your security system, such as the delay durations.

Since the default PIN is always 1234, you have to select another PIN which should be a secret code. Avoid apparent codes such as your phone number, birthdays and anniversaries among others.

It is better to choose a code that is not related to you in any way. Use the keypad buttons to enter your selected PIN and click on the right side of the screen. This will set the code and make your PIN ready for use.

Now, install your keypad at a preferred location. Attach it to the wall using the for adhesive strips attached at the back of the device.

You can start the installation with any sensor. Reach the door or window where you want to install the sensor. Follow the guidelines on the keypad on how to handle the sensors?

Next, get the battery tab and test your sensor. Every sensor has a small testing button located on the side of the device. Name your sensor by scrolling through the names provided on the keypad screen.

Mark your favorite spot and place the widget. The last step is to click “Done” on the right side of the screen and have a full security installation.

SimpliSafe provides a lot of features that help people secure their home and family. Below are the listed some of them which makes is better than other home security systems.

Unlike any other professional graded home security system, SimpliSafe comes with an additional 3 years of warranty. A customer can return the system if any technicalities end up affecting its functionality.

When returned within the first 60 days of purchasing it, the user can reclaim the money.

Simplisafe is impressive in the most unique ways. It can store hours and days of internal video surveillance videos automatically for future reference. Both motion and sound detectors, as well as heat sensors, can add valuable data to the stored video records.

SimpliSafe has an easy time adapting to new internal environments. Configured with billions of endless suggestions, commands, and ideas, SimpliSafe’s mobility comes as the icing on the cake. Because of this portability, SimpliSafe is deemed as an ideal home security system.

This plan can be used to arm both the home and away modes of the alarm system. Significant to note, the alarm can still work without the app. When using mobile devices, monitoring gets more comfortable with every second.

Elongated Battery Back Up Plan

SimpliSafe comes with an extra set of long-lasting batteries that continue to keep the alarm active during power shortages. The idea is to create an all-round security system plan that never fails despite natural and technical causes.

Does simplisafe call the police? Yes, simplisafe professional monitoring system calls the police once the alarm goes off. However, this facility is not available with the self-monitoring plan.

I am Jenny. I spend each darn end of the week taking a shot at home tasks and trimming down the "nectar do" list. This is where I share the majority of the undertakings I've done and things I'm learning.